I tried for a while to come up with a non-clichéd title for this post. All of the obvious ones, whilst fine for social media, seemed a bit trite for a more reflective piece.

Leonard Nimoy has passed away after illness, everyone knows this by now. His most famous creation, Mr. Spock, the half-vulcan science officer aboard the USS. Enterprise, had already died of course, and then come back to life in the film Star Trek: III.

I never met Leonard Nimoy. I would have liked to. He was  the only actor on my, rather short, list of ‘inspirational heroes’ whilst growing up. But truth be told though, it was Mr. Spock who was the hero.

My father introduced me to Star Trek in the mid 1970s. It was long in syndication (re-runs) by then and I was immediately captivated by the idea of going where no man (where no one!) had gone before. Initially the fascination was simply with the ship, with the battles, with the exploration. 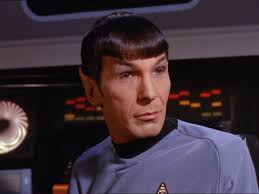 As I grew older I began to notice the teamwork, the diverse nature of the crew and the clever characterisation around Kirk, Spock and McCoy. The leader, the man ruled by logic and the man ruled by emotion.

I was an odd kid. I was a loner, interested in physics and astronomy whilst my peers were interested in BMX bikes and football. I didn’t fit in. I was bullied at school. I tried to emulate Spock, locking my emotions down in those years, to survive various traumas the world seemed keen to inflict. I even learn’t how to do ‘the eyebrow’ – that took weeks of practice.

In Spock I saw somebody adult who was also ‘different’. Somebody who wasn’t like everyone else. He was still teased, good naturedly, by the Enterprise crew, but he had found his place in society and was valued for it. He applied his amazing skills to the problems the Enterprise encountered, and yet he wasn’t right all the time. Sometimes logic wasn’t the answer. I saw him grow and appreciate the power of an emotional response. Spock taught me to be true to myself, that conforming to the insecurities of bullies, the limited scope of my teachers (I was told at school that I would never amount to anything much), and even the fears and worries of my parents was not something I should let myself be bound by.

I know many other people feel this resonance with the character played by Leonard Nimoy, it’s down to his amazing acting that we had this strange, alien, yet somehow so ‘human’ role model to look up to.

Rest in Peace Leonard, and thanks. I trust we will all live, long and prosper. If we do, it’s thanks, in great part, to you.

Share this:
Emanation
Ouch! Writers' block can be painful!