So what am I really trying to say?

There’ll be a Cobra Mk3 in the story..

My pace is increasing!

Maybe this is due to working on the closing parts of the story and beginning to tie up all the loose ends, but the word count is now 88,186 words, comfortably ahead of the target of 84k.

I’m half way through chapter 12, but I’ve been doing a little work on the closing chapter and the Epilogue. I discovered that I needed to evolve the final moments of the story in order to ensure that previous chapters give the right hooks. Now that I know precisely how it ends, that’s been made a little easier. I’ve got a few weak plot areas to tidy up as a result, but I don’t think that will present a major problem.

The writers now have some good detail on the ships.

What else have I been doing? Frontier has provided the writers with a first draft of the ‘Ships Guide’. This is a fascinating document (can’t reveal – sorry!) which gives us an idea of all the spacecraft in the Elite universe, both playable and non-playable, their approximate sizes, configurations and roles. Some of these are quite well developed; others have nothing other than a vague description. Tantalisingly, there are some ‘familiar names’ in there, for both fans of the original game and those of the sequels. More than that I’m not allowed to say! 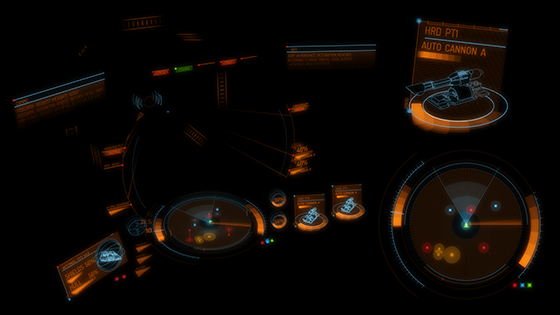 HUD design fitted well with the story as it was.

With this I’ve been able to replace all the <someship> marks in my story with real vessels. Somehow that’s made it a lot more ‘Elitey’ to read. I’ve also tweaked some of the internal descriptions according to the cockpit HUD we’ve all seen. I’m anticipating that more cool stuff will be coming our way before too long.

I’ve been asking a few questions in the writers’ forum too. How escorts and convoys work, what are the measurements of time… I also asked how lasers will appear. Frontier have confirmed that lasers will be ‘visible’, a nod to gameplay over realism. A good call I think. I will need to tweak my story, as I’d assumed they were ‘realistic’. It’s not a big deal.

I’ve also been asking what weapons are available to the ships. For now they’re working on it. I’m going to have to wait. The last thing I’ve been doing is adding a few other ‘Elitey’ things into the story. They’re mostly just nods to the folks who really know their Elite backstory.

So progress is good…

Last week’s topic certainly got the creative juices flowing! The most commented article to date. Whilst comments are always great, it was gratifying to see that we could disagree on some things with respect and cordiality; a mark of a mature community if ever there was one. Bravo everyone.

So this week? Probably not so controversial. Heading back into the creative side of things…

Sci-fi is usually, not always but usually, about the future. Some world that has yet to be. It’s often markedly different from our current situation, in technological capability, social constructs, or economy and condition. Some science fiction deals with the horror of post-apocalyptic survival, others with the collapse of civilisation as we know it. Some portray the future as a place of wonder, where the evils of our current short termism have been banished, others predict a gloomy future where mankind regresses in one or many ways.

Some science fiction is plain adventure (Star Wars is a great example of this). This is classic greek myth in a modern incarnation. Old mentor, young hero, beautiful princess, shadowy villain with a dark past. A dash of magic provided by ‘the Force’ and a modern take on the venerable trusty sword. You know where you are with this kind of tale.

Star Trek is a little more sophisticated. Here’s a universe not so far far away. It’s the foreseeable future. Mankind has bettered itself and sets an example for the rest of the universe. Technology is positively presented. Star Trek also made a strong social commentary on issues of the day; Racism, Sexism, Drugs and the fear of uselessness in the face of relentless automation to give a few examples. At its best Star Trek allowed us to approach these difficult issues in a ‘safe’ way. What is unacceptable in the contemporary is often acceptable in the world of science fiction. Many writers use sci-fi in this fashion, holding up a mirror to current society and highlighting social aberrations. 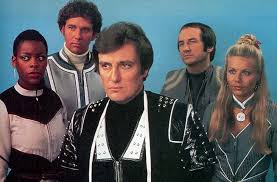 Blakes Seven, often panned for its astonishingly cheap and cheerful special effects (and conspicuously missing apostrophe), had the benefit of some excellent writing and story telling. Here’s another dystopian universe, with an oppressive ‘Federation’ and a bunch of flawed freedom fighters trying to make their way. Robin Hood in space? Yes, I guess it was, but none the worse for it. 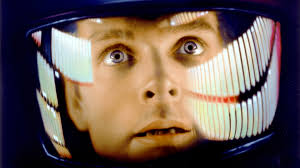 Break the laws of physics? I’m afraid I can’t do that…

Some science fiction (Hard Sci-fi) goes for realism. Not for them the jump to hyperspace or warp drive, anti-gravity or spacecraft that weave and duck around each other like World War I biplanes. Utter slavishness to realism is key. Here the writer explores the implications of advanced but realistic technology. What would a holodeck really do to society? With infinite energy at our disposal what would happen? How would mankind survive a voyage to the nearest star with sublight propulsion over decades? If you find a big black slab on the moon, does it hum the Blue Danube?

Which brings me back to Elite:Reclamation. It’s an Elite novel, so you’ll know something of what to expect. You’ll have seen my other work in the Oolite Saga, which also gives you a clue. You’ll have heard the prologue excerpt and drawn some conclusions from it. But what’s unique about my story, what am I trying to achieve with it? To use a writer’s cliché… how would I define my ‘voice’? Slightly more dramatic than this though…

First off, Elite:Reclamation is a dialogue driven story. I’m not going to tell you what is happening, you’re going to have to figure that out from what the characters are saying to each other. You’ll have heard that already with the exchange between my Federation Commissioner and the Imperial Ambassador. You need to pay attention. There are subtleties in there. Each section of dialogue gives you clues which you’ll pick up on as you go through.

But this is style, not commentary…

I’m not going to be making a big comment on the social issues of the day. This isn’t Star Trek. My story isn’t formulaic like Blakes Seven or Star Wars, nor is it hard sci-fi like 2001. So what is it?

It’s about people. A big part of my day job is training managers and team leaders how to engage with and look after their staff. I have to be a shrewd observer of behaviour, listen to words and watch body language and pass that skill on to others. I spend a lot of time coaching my teams on how to deal with conflict, defuse situations and negotiate difficulties. It’s a fascinating and never ending activity, and there’s always something new to learn.

I deal with a lot of people and note a lot of things. Each person comes with their own preconceptions, assumptions, insecurities, ambition, style and drive. There is huge variety and it’s my job to turn these different skills into a functioning team, working towards a common goal. In this I have a bunch of tools to help me; personality profiles, skills identifiers and psychometric evaluations. Connecting with people and understanding what makes them tick is central to it all. It boils down to effective communication. It has the slightly odd moniker of ‘Emotional Intelligence’.

It’s a subject all of its own, but the essence is understanding why people are the way they are.

Set phasers to kill. (And nuke her planet, just in case.)

What’s this got to do with the novel? My specialism is crafting characters with real depth, people that are realistic, folks you can identify with. Each character in Elite:Reclamation has strengths and weaknesses, gifts and flaws. There are no ‘goodies’ and ‘baddies’; there’s just folk with different agendas. These agendas overlap and that brings the characters into conflict with each other. How they deal with this depends on how I’ve put their personalities together. Are these based on real people? No, that would be unfair, but they are based on real traits.

I’m the baddy!  Is this obvious enough for you? I’ve got the intense stare, eyebrows, goatee and everything! Bwah ha ha ha!

What sort of themes do I explore then? There are many. The cost of chasing a dream against your parents’ wishes. Being the poor relation in a family and being unfairly overlooked. Seeing your plans shattered by sheer bad luck. Making a bad call and fearing the consequences. Being manipulated by those with power over you. Desperately trying to hide your insecurities. Trying to find a place where your talents and gifts can be truly appreciated. Dealing with the inevitability of advancing years. Making a choice between what is right and what is good. Waiting for something for so many years you almost forget what it was…

If anything I’m holding a mirror up to us all. We just happen to live in the 21st century. I really don’t think people will be much different in the 33rd. We’ll fight, love and hate. We’ll still be good, bad, happy, greedy, selfish, concerned, threatened and vulnerable. We’ll just have more scope for all of that humanity to show through. 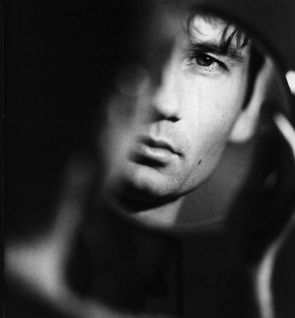 Will you recognise yourself?

So if you find the story compelling, it will be because I hope you recognise something of yourself in the people I describe. If I’ve done my job well you’ll feel not only the emotions of the characters, but emotions for the characters. Sorrow, fear and dread… laughter and the exhilaration of success… despair over their decisions…

Yes there are spaceships, battles, planets and the sense of adventure amongst the stars, but the core of the story is right here, right now.

Elite:Reclamation is us, all of us. Still looking forward to it?

Share this:
It is different, but it's also the same
So you want to write a book?