Roleplaying in the Elite Dangerous Universe Characters already exist, soon they will have faces too…

I recently had the privilege of being interviewed on Lave Radio after a gap of about three years. If you haven’t listened to it you can catch it here thanks to the wonderful Chris ‘Fozza’ Forrester.

We only had an hour or so, not much time to delve into the detail of the topic at the end. I’ve been giving it a little thought since.

Back in 2013 when I original wrote Elite: Reclamation I was aiming to produce a very traditional outcome. A book. A novel. A story. My original plan was simply to produce an ebook and I was mostly concerned with the quality of the story, paying homage to the previous Elite games, giving something back to the fan community (as it was then) and doing my best to look forward to what Elite: Dangerous would become. I hoped to write a book that Elite fans would look at and go “Yes, Drew nailed it.”

During the writing of that first book, I only had reference material, not the actual game itself, until very late in the process. I got the ‘Alpha’ drop of the game in the closing stages of editing and made a few changes as a result.

Many things happened in the following year. Fantastic Books Publishing raised the profile of my book and many others, turning them into paperbacks, hardbacks, special editions and audiobooks. This far exceeded my original plans.

But the story hasn’t stopped.

Whilst there are many fans of the original Elite games still represented in Elite Dangerous, I’m pretty sure that the overwhelming number of players today have joined the adventure since the advent of Elite Dangerous itself. They have embraced the background and features of the game and shaped how it has evolved since.

Back in 2013 there were no minor factions, no game communities, no reddit fora. Since then we’ve seen the rise of prominent youtubers, twitchers and facebook groups. Many player factions have their own websites and forums – there are literally hundreds. Today the expanse of subsequent activities that orbit around Elite Dangerous is enormous, certainly beyond my ability to catalogue. Some are funny and mischievous, others are deadly serious.

My initial aim was merely a good book!

I was quite overwhelmed with the response to my book at the time of launch, but the reaction to it and the characters within has only increased since. Reclamation was a point in time, but the story I told and the idea that it was connected to a game in which players could begin to tell their own stories… the sheer possibilities that transpired from that were beyond my imagination.

Which brings me to my topic.

I’m not talking about RPGs (RolePlaying Games). If you want that you need to check out Dave Hughes’ Elite Encounters. There’s another ED one in the works too, if it achieves Kickstarter funding in January.

No, I’m talking about players of Elite Dangerous role-playing in the main game itself. Not quite MMORPG, but I hope you know what I mean.

Some player factions have completely ‘blazed their own trail’, others have taken up initiatives based on in-game events such as Beagle Point, Jacques Station and Colonia, others based around the scientific mysteries in the game, others forming around the major factions and some simply exhorted the virtues (or otherwise!) of PVP and PVE. Most gratifying for me is that there are dozens of player factions that have associated themselves with the events of my book and based their own fiction and roleplay upon it. The sense of community and shared ideals is palpable. There are too many to mention and to single out a few would be unfair, but I admire them all. 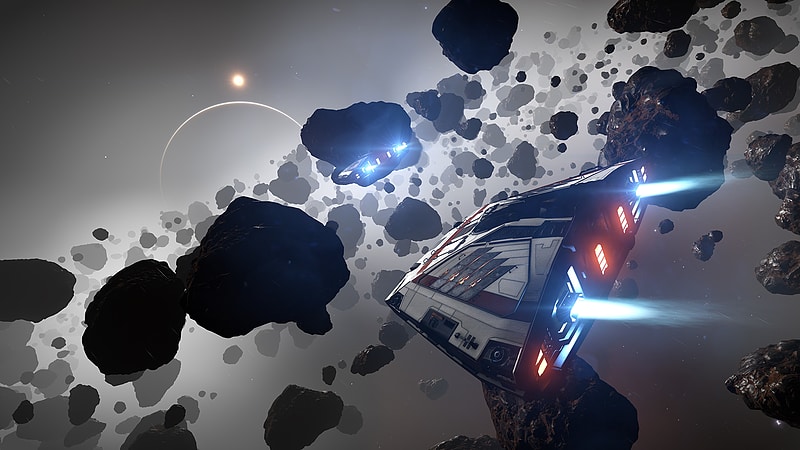 Blaze your own trail… and you have!

Thus the Elite Dangerous universe is now full of activity, characters, events and happenings which the players have created themselves which relate back to the book I wrote. These are not my creations, but they’re no less important than anything I have added. It’s hugely gratifying to me to see them come into existence and have a life of their own. Some work to further events from the book, some seek to destabilize or deliberately frustrate those efforts. Some ally themselves with the Elite Reclamation characters, some are openly hostile to them. Real drama, playing out inside a computer game.

I’ve been privileged to see player groups writing fan-fiction based upon Elite Reclamation and also see the in-game roleplay that these groups undertake. The enthusiasm and energy with which they engage with their own stories is remarkable and, for me, very humbling indeed. I’ve seen them attack Capital ships, work PowerPlay for and against, embargo systems, go on lengthy exploration trips… all because they care about the characters and mysteries I put into my original book.

I’m fortunate now to be in a position where I can return the favour a little. As these various groups interact with the story in the game, they continue to influence the outcome of that story, weaving new threads and nuances into the overall flow. Subsequent GalNet articles have had to be tweaked, or trashed/completely altered because of player interaction. Elite Dangerous Premonition will chart some of this activity (alas I can’t do anywhere near justice to it all!) and I hope lead to further roleplay opportunities. Even better, in some cases, player groups have been forced into morally difficult decisions with uncertain outcomes, unsure if they are the ‘good guys’ or not.

In no way was this activity planned out, but it’s the sort of thing I hoped would happen. This truly is emergent gameplay, with more lore generated by these player groups than can (probably) ever be documented. To those who have created it I can only offer my admiration, respect and thanks  for the efforts involved. There’s no greater reward for a writer than to see your work built upon and expanded in all sorts of unexpected directions. This makes it endlessly fascinating to me, because some of the stuff that results is far better than anything that I would have come up with!

Many have said they’d like to see a film made of my book, or perhaps just based upon Elite Dangerous itself. I’d love to see that too, but in someways this is better. The story continues, it never stops. It’s happening right now, across different time-zones, countries and technical platform. It seems you really can’t stop the signal. 😉

I’m convinced this is something quite unique in both the writing and game-playing domain. I can’t think of another example where a game franchise has resulted in books which has then resulted in widespread player interaction with a story that then gets wrapped up in another book…

It’s weird, it’s wonderful (it’s causing me to pull my hair out at times)… and it’s thanks to the fabulous Elite Dangerous player community.

Share this:
It is nine score and four days since the writing began...
Thoughts on dialogue