Elite: Reclamation has been available for two years now.

I’ve been asked this a few times before by folks and I’ve avoided answering it specifically – but after a couple of years most people will have had a chance to get these. So what sneaky little nods and references to other works, books and games (including the previous Elites) did I drop into Elite: Reclamation?

When I was writing the book I wanted to do a few things:

So below is a list of those things. Did you spot them all?

Cuthrick Delaney – This chap was based on my grandfather, Cuthbert Leeson. He was a proper old school gent who served as an RAF officer in the second world war. He was extremely well spoken, never lost his cool and had a natural dignity and bearing that you just don’t see anymore. I tried to capture what I remembered of his mannerisms in Cuthrick, my grandfather passed away in 1983.

Jenu and Tenim – These two were characters in the first piece of fiction I ever wrote back in 1984 (a completely rubbish Elite story as it happens!). They also had bit parts in my Oolite Saga. I brought them back and made them part of the ‘real’ Elite universe – a bit of a homage to the 13 year old me who started writing way back when. 😉

The Wedding feast scene – A nod to my Oolite story and the ‘lost’ creatures of the Elite universe (Felines, Lobstoids, Birds, Rodents and Lizards). In the Oolite story this was a scene where the Thargoids are revealed to only be exterminating humanoids, not the other creatures.

The starship Aegidian – Aegidian.org is the server hosting the Oolite Bulletin Board.

The starship Xajorkith – Xajorkith is the name of the capital citadel in the “Lords of Midnight” computer game by Mike Singleton. My other favourite ZX Spectrum game and also written in 1984.

The starship Caduceus – A nod to one of the most innovative 3rd party ships built as an add on for Oolite. Oolite has the advantage that you can mod it and introduce your own ships, missions and so on. The Caduceus ships featured in the later parts of Oolite.

The plasma accelerator aboard Octavia’s ship – This was a reference to the Huge Plasma Accelerator Saga written by multiple fan-fiction authors (including official writer John Harper) back in the days of the alt.fan.elite newsgroup.

The Captain’s comments about ghosts in witch-space – A nod to “The Dark Wheel”. There was some lovely myth-building about the dangers of hyperspace travel that Robert Holdstock put into the game. I re-used the text and the Captain responds with “Sounds like my grandmother.” 😉 Naming of planets and moons in the Prism system – A nod to Ulysses 31, my favourite tv show in 1986. If you haven’t seen this it is worth looking up. Quality childrens television of a type you don’t see nowadays. Classic Greek myth jazzed up with lightsabres, spaceships and blue-skinned aliens! There is a sequence to the naming convention used here.

Remlok – A nod to “The Dark Wheel” again. This was the device that saved you if you got ‘spaced’ and hit the hard vacuum of space without a ship. “In space, everyone can hear you scream.” – if you have a remlok.

Canos providing Salomé’s ID bracelet with 100 credits to “get her going” – A nod to the start point of the original Elite, where you started out with just 100 credits and a basic Cobra Mk3.

Illegal launch comms at Ferenchia – Nod to FE2 and FFE. If you blasted off in these games without getting clearance, local enforcement got very upset and sent the police after you.

The original Mk1 Eagle, flown by the player in FE2, ended up with Hassan!

ID plate of Hassan’s Mk1 Eagle as referenced by Octavia – “TY-198” – This is the ship registry of the Eagle the player starts with in Frontier: Elite 2 in the year 3200. The ship is thus one hundred years old by the time of Elite: Reclamation and has been through many adventures. (I wonder how it ended up with Hassan in 3300?) I crashed it in the LTT 8740 system, but it went down heroically!

Sushil Sharma – Named after the first boss I ever had at work. A top chap who taught me a lot about computer programming and project management. I was his apprentice in the late 1980s.

Vargo – A nod to my geography teacher at secondary school. I vividly remember him asking us to turn to page 3 of an Atlas and look up a grid reference so he could tell us where he was from. We duly looked and, due to him having a new version of the Atlas and my classmates and I having an older version, discovered that he came from the planet Venus.

The scene where Luko and Salomé encounter the bounty hunter in the Vulture – A reflow of a similar scene in “The Dark Wheel” by Robert Holdstock. This was the definitive tension piece in the Dark Wheel. For those who loved this old story from the original Elite I wanted them to know I loved it too.

The Trumbles only appeared in the C-64 version of Elite.

The Trumble Salesman from the SS. Hesperus – A homage to the cowardly feline character from Oolite fiction, Commander Hesperus, who flies a very ramshackle Python called the “Dubious Profit” crewed by an mad crew of Lizards, Birds and Insectoids and who makes his living by flogging trumbles to the anyone he can con into buying them.

The droid that flies past humming “Priest’s perfect protopolyps, Tuttle’s tasty therapsabladders! Last real food before witch-space!” – Another Dark Wheel quote. In the original book these were advertising droids outside the station. In Elite: Reclamation Salomé gets buzzed by a flying drone.

Hiram’s Anchorage – Named after my father, Hiram Holroyd Wagar. My father sadly passed away in 2013 due to cancer, never seeing the end result of my book, though he did back my Kickstarter. I was able to let him know I would dedicate it to him and that there would be space station in the game named after him. A lifelong fan of science and electronics he loved the idea, but unfortunately never got to see Elite: Dangerous. If you do visit Hiram’s Anchorage in the Prism system, raise a glass to him. 🙂 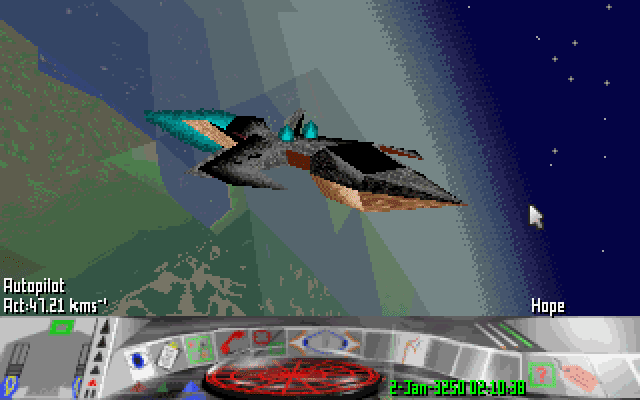 Take off in FFE.

The landing and take off sequence from Ferenchia – Frontier: Elite 2. This was the best bit of FE2 from my perspective. As you launch in those games, if you choose the right time of day, you can fly off into the sunset, watch the sky darken to black. It’s quite magical and I wanted to capture that feeling in the story.

The sticky goo in the pilots’ chairs – Silastoplaston from the Frontier: Elite 2 manual. This material caused me all sorts of grief in the story because it took ages to lock down what the material actually did in the universe of Elite: Dangerous! It’s effectively a clever cushion as there’s no inertial management tech in the ED universe.

A vintage Cobra Mk3 from Oolite (Art by Griff)

Luko’s Cowell and MgRath vintage Cobra – Original Elite Manual. In Elite: Dangerous The Cobra is manufactured by Faulcon De Lacy, but this wasn’t always the case – originally they were designed by Cowell and MgRath. I wanted Luko’s Cobra to come from the time period of the original game, indicating it was really old (almost 200 years). Thus it is described a bit like a classic Jaguar sports car, with lots of physical gauges rather than the modern hologram displays. Luko has customised it a lot though and it’s still a mean machine.

Luko’s “Ass of solid Iron” comment – Another Dark Wheel quote. If you have an ‘Iron Ass’ you have a potent ship.

The ‘atmospheric’ Adder in the final battle – Original Elite Manual the Adder was one of the few ships capable of landing on a planet. It was equipped with something called “Pregg’s Wingfolding Technique”. Hassan makes mention of this to Salomé.

The clock in Luko’s Cobra – This appears in all my books series somewhere. It’s a sort of cross-dimensional multi-verse timepiece. Have you spotted it in Torn and the Oolite Saga? It will shortly be in Shadeward too. 🙂

Luko’s Cobra not having flown for 20 years – For Frontier: First Encounters. That was the last game prior to ED written in 1995. 20 years passed between it and ED (pretty much!)

The Original Imperial Courier was a thing of beauty. Sadly missed. 🙁

Kahina’s Imperial Courier – This is still a sore point. 😉 In Frontier: Elite 2 the Imperial Courier was a big beast of a ship and a formidable opponent. It also looked rather like the Blake’s 7 ship ‘Liberator’ and as such, the coolest ship in those games. It had funky spinning engine nacelles and a bright blue exhaust. It was the daddy. The Imperial Courier in Elite: Dangerous is a lovely little thing, but it’s not the “Imperial Courier” as far as I’m concerned. I had to retcon the ending of Elite: Reclamation. Hassan and Salomé end up in an Imperial Clipper instead.

Commissioner Hughes in the Tionisla system – A vote of thanks to Dave ‘Selezen’ Hughes and his work on the Elite timeline. Dave tried to rationalize the completely at odds lore of all the Elite games long before ED was a thing. He is also author of Elite: Encounters, the upcoming Elite RPG.

Oh and the family in the lift that Salomé sees and thinks the father looks vaguely familiar? Yeah, you got me. I wanted to meet her. 🙂