Never underestimate the power of an idea 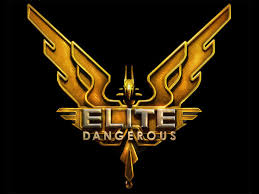 Now that we’re ‘officially’ official I can use this…

Progress update this week – Still going great guns and the pace isn’t slackening. Big chunks of Chapter Nine are slotting into place. We’re at 57,167 words against a target of 56k, looking forward to cracking the 60k mark at some point next week.

In other news, I’ve received my Frontier contract back all signed and sealed. Since I’m now ‘officially’ official, I’ve updated the graphics to indicate this. I’m now legally entitled to use the Elite (and Frontier) logos, so there they are. Cool, eh?

Likewise the contract with my publisher is also signed and carefully filed away. With the legalise taken care of I’ve just got to get this first draft written and complete. The target for that is the end of August, which is a mere 11 weeks away. Just typing that was quite scary!

So – on to this week’s topic – the community of Elite.

This one is going to be a bit tricky to get a grasp of – where do you start? I think looking at it in chronological order is probably the best! 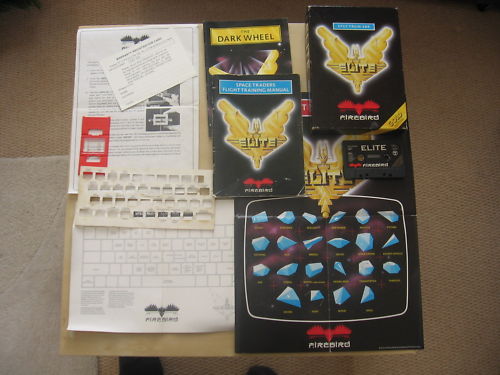 As I’ve mentioned before, I came across Elite in 1984, pretty much as soon as it came out. I saw it on the BBC and it was the ‘must have’ Christmas present for a young teenager. I clearly remember the thrill on opening the box, stuffed with books, manuals and keyboard overlays.

More than this though, we talked about it endlessly at school. My mates and I would discuss the relative merits of the different ships, the efficacy of the military laser, how on earth (in space!) the energy bomb actually worked.  We hunted for, but never found, the space dredgers and generation ships. We regaled each other at the next break-time with our exploits in the game against pirates and bounty-hunters, each story more unlikely than the last.  I even decorated the outside of my text books with wire-frame models of the Cobra Mk3. We were obsessed. Goodness knows what our teachers and parents thought about it. It was far worse than the earlier skateboard and Rubik’s cube.

We even wrote really bad fan-fiction (ghastly horrible teenage angst stuff for the most part) long before the term was coined, all based on Elite. I’ve still got my first ever written tale – it’s an Elite story. Kids, spending their play-time voluntarily writing – how unlikely was that? It happened.

I even remember being told off by my English Lit teacher at school for “Writing too many whoosh went the rocket stories.” Schools in the 80s were just lovely, weren’t they?

“Elite was a refuge from a crappy day at school”. However bad school was we could go home and, at once, be powerful, significant; losing ourselves in an endless universe of adventure.

Somehow David Braben and Ian Bell bottled compulsion and obsession within 32 kilobytes of random access memory.  Looking back on it now, it’s not the 3D graphics or the procedural generation that were most dramatic – it’s that this game, and its sequels, moulded and shaped the minds of countless youngsters, something that had a profound effect on them as youths which has rippled into their adult lives.  I can’t conjure up the image of that spinning wireframe Cobra without a twinge of excitement. The moment I see that shape it’s 1985 again and I’m off for adventure amongst the stars. It’s burnt into my mind at a seriously fundamental level.

The internet didn’t (effectively) exist back then. Magazines and the occasional TV show, supplemented by the odd kid at the back of the class who always seemed to have some new bootlegged version on a dodgy C-60 cassette, were the only ways for the community to talk to each other.

Fast forward to the 21st century.  I made a career out of IT, which so many others of the original 8-bit generation also did.  I clearly remember getting one of the Palm PDAs of the time and being told it could emulate a ZX Spectrum. My first thought? I could play Elite on that…

It was trying to find a native version of Elite for the colour Palm PDAs that lead me back around to Elite. It never came to light unfortunately due to some licensing issues.  That led me to Oolite, which is now an amazing and extended homage to Elite. It has far surpassed Giles William’s (Oolite’s original author) intentions, who wrote it because (and I quote directly having met him) he ‘just wanted to play Elite again’ after all the hassle with the various versions that got pulled due to all that legal trouble.

The Tionisla Graveyard as realised in ‘Oolite’, a community add on, not part of the base game.

What happened there? A community took over. The Oolite community is focussed exclusively on the original ‘Elite’ and the game reflects that. Oolite is what Elite ‘was’ in our imagination, faithfully allowing the generation ships, space dredgers, the Tionisla graveyard and all the other things that were alluded to in Elite but never really made, to suddenly ‘exist’ and have a life of their own.

I wrote my first Oolite fan-fic ‘Status Quo’ to play out in this new ‘Ooniverse’ and I’m humbled that it’s been adopted as Oolite’s  equivalent to the ‘The Dark Wheel’.  It’s 100% free, a  thank-you to ‘Elite’ for all it gave me as a kid.

Fast forward to recent times. Elite 4? No, it’s called Elite Dangerous. It’s a kickstarter… woah… is this really happening?  25,000 people pledged money for a game that hasn’t been seen since 1993. More than that, the kickstarter comments thread developed a bizarre and quite astonishing personality all of its own. Jonties,  Onesies, SPLs, Ganking – a whole new set of terminology somehow conjuring itself out of the ether. The infectious and compelling nature of the kickstarter, the compulsive pounding of the F5 key that so many reported, the tangible sense of loss when it all finished – almost as if it were some kind of illicit narcotic that could easily have been found in the 20 ton (unmodified) hold of a Cobra.

Lave Radio, Mobius’ signatures and artwork, EliteForever, EliteStories, Escape Velocity, LaveCon and all the supplementary writers’ projects; books, games, anthologies and chronicles plus a legion of fan websites, fiction and artwork that would be almost impossible to catalogue…

Dave Hughes (Elite Encounters roleplaying game), all kudos to him, spent literally years working out how to rationalise the completely disparate backstories of Elite, Frontier and First Encounters…

What is this phenomenon? What is this compulsive drive to research, collaborate, share, discuss, argue, debate, create, write, draw, record, illustrate, set to music and act out? Why is Elite so utterly compelling to so many of us? At the risk of getting lynched… it is just a game…

Even after all this time I’m not sure I can quite nail it.

It’s something to do with being impressionable youngsters at the time these games came out. Our minds were so open to influence in those early years, Elite became a major part of our adolescence, so it continues to resonate today. You’re already humming that theme, I know you are…

It came at the right time too. Back then we had Concorde, the Space Shuttle – the first spaceship that actually looked like a proper spaceship – and the Voyager space probes. We had Star Wars and Star Trek, Battlestar Galactica, Space 1999, 2001, Battle of the Planets, Ulysses 31 and the rest. Space was in vogue and Elite paid homage to these influences. It took what it could aboard given the limitations of the game.

But Elite allowed us to be the pilot. Those films were great, but we got the opportunity to actually  be Luke Skywalker, Princess Leia, Captain Kirk, Starbuck or Sheba. This was our adventure, unfolding in real time, unscripted, unpredictable. Who couldn’t help but be sucked into a universe where you really were the hero or the heroine? Where what you did mattered, where you could defend or prey upon innocent traders, test your mettle against the worst anarchic pirates and face the dreaded Thargoid menace? Who knew what was lurking just beyond scanner range… the same thing that has tantalised explorers since time immemorial… what’s beyond that mountain?

Yes, it was just a game, but a game that fired the imagination, not a game that sequestered you into a narrow one dimensional series of cut-scenes with a linear story. 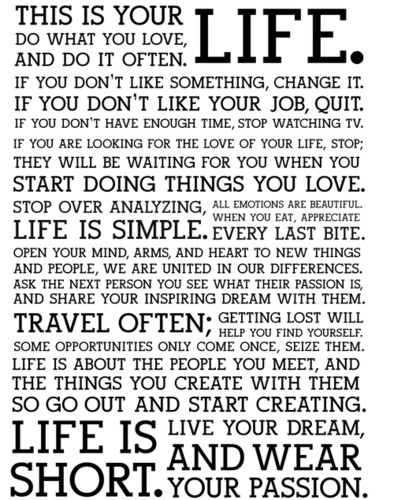 This community, of which we’re all a part, is a profound and special thing, a living breathing acknowledgement of the dramatic impact that a mind broadening event can have on the minds of youngsters, now playing itself out in forums, meetings, books, games and other products.

We’re all part of something very special. Long may it continue.

Make sure you take time to enjoy these brief fleeting months while we wait for the game and the books – because this is a going to be a significant moment that you will look back on with great fondness and nostalgia in years to come.

Hang on to your seats, Commanders. You ain’t seen nothing yet.

What do you think ‘makes’ the Elite community? Answers in the usual place, below.