Lords of Midnight is complete! 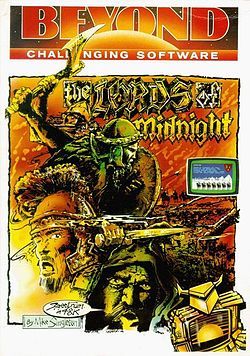 At 10:40 this morning I made the final tweaks to the final draft and sent the manuscript back to the publisher.

It’s been a long and weary road since completing the first draft back in December last year, but the difference between the two documents is striking. The final draft is polished, sharp, better structured and (hopefully) devoid of typos. Editing isn’t my favourite activity – I don’t know many writers who actually ‘enjoy’ it, but it’s utterly essential to the art of crafting a good story.

The editors scalpel can be painful to wield, but those cuts and incisions do make for a better book at the end of the day.

I am very happy with the final draft of Lords of Midnight. Chris and I have been back and forth through the lore of the game and the sequels, through all of the manuals and gameplay, even through some of Mike Singleton’s notes. We have consolidated all the existing lore, worked through the discrepancies and tried to use our judgement to decide on what Mike’s vision would have been where it wasn’t clear from the game or existing material.

We’ve created arcs which span beyond just a single book, mindful that we hope to be able to write more stories in Mike’s amazing worlds. We have tried to answer, where it makes sense, some of the open questions about Midnight itself and provide a bit of history of the world via the characters that have experienced it.

We made special effort to flesh out and differentiate the characters of Midnight; the primary cast of Luxor, Morkin, Corleth and Rorthron and the eponymous ‘Lords’, along with the other characters fans will be expecting to see. Conscious that there is a next book in the series with additional characters, we have woven in backstory for them too, to allow them to segue into the events of the following stories without simply ‘appearing’ in the narrative.

Next book, you say?

Yes! It was (and is) our intention to continue on with what we are currently calling ‘The Midnight Chronicles’. Lords of Midnight the game goes straight into Doomdark’s Revenge, the story doesn’t end here by any stretch of the imagination.

We’ve worked on the lore and the structure of this book to ensure we can continue into others. I’m very excited about writing Doomdark’s Revenge and then continuing further with the saga.

I’ve enjoyed writing my first fantasy book. If it is well received and sells well then it is very likely that more books will come – the commercial success does dictate whether we’ll be able to continue.

For now then, it’s back to the publisher. Cover art and typesetting is next on the list and with the book due to be available towards the end of May.

Night is almost over and the eastern sky grows bright. Not long until dawn!