History in the making

Another week and, this time, another update from Frontier. They’ve clearly been busy beavering away at the Alpha release – and judging by the latest dev update, it can’t be far away. My PC is prepped and ready to install… December is just around the corner.

There were a lot of very interesting things in that video from my perspective. I particularly liked the cockpit illumination and the design of the interior of the spaceships. It was also gratifying to note that the ‘holofac’ instruments and general layout matched how I’d imagined the ships very closely indeed, so I won’t have too much tweaking to do to match up what is in my story with the game from that perspective.

The key word for me was ‘immersion’. A lot of attention to detail has been placed on subtle touches that really ‘put you there’. The bob and weave of the cockpit in a sharp turn, the jolt from fierce acceleration or impact from enemy weapons. It’s impressive stuff. There was even a nod to the original game… and did you spot the BBC keyboard in the cockpit?

The game is clearly being designed with future expansion in mind, which is great.

As I’ve mentioned before, ensuring that the story matches up with the in-game experience is crucial for me from a quality perspective. I can’t wait to get my hands on the Alpha and try it for myself. It shouldn’t be long. A future blog entry will talk about my initial impressions as I take an Elite starship out for spin for the first time in many many years…

An interesting day, tomorrow marks the anniversary of my Kickstarter being funded. Is it really a year since then? Yes, it is. A whole year in which this Novel, Elite:Reclamation, has gone from Kickstarter, to plan, to rough and now polished draft. Feedback from the editor is still coming in so plenty still to do along with the awaited Frontier info. Then there’s the new Kickstarter as well…

How is that going? Overall progress is good. We hit 33% of target in the first week and we currently stand at £11,475. Lots of familiar faces and comments – feels like we never left.

For those of you not onboard with the new Kickstarter, a few new bonuses have appeared since the project kicked off!

Here’s the Kickstarter Link if you need it to hand.

A rather tongue in cheek story line has been developing between Commander Dan, Senator Drew, Commodore Susimetsa,  Agent P (Psykokow) and other notable characters. Don’t miss out on them – they’re great, although you’ll have to be an Elite fan to ‘get’ them I think.

We’ll be taking a look at the more serious side of the promotion in the next few weeks too, we don’t want to appear too clichy and geeky. (A tough ask for some of us I think! 🙂 )

One particular highlight is Chris Jarvis’ reading (scroll down the KS page, it’s about halfway). Don’t miss out on that. He’s the man behind Escape Velocity, of course. His audio reading gives some insight into what our finished audiobooks may well sound like. 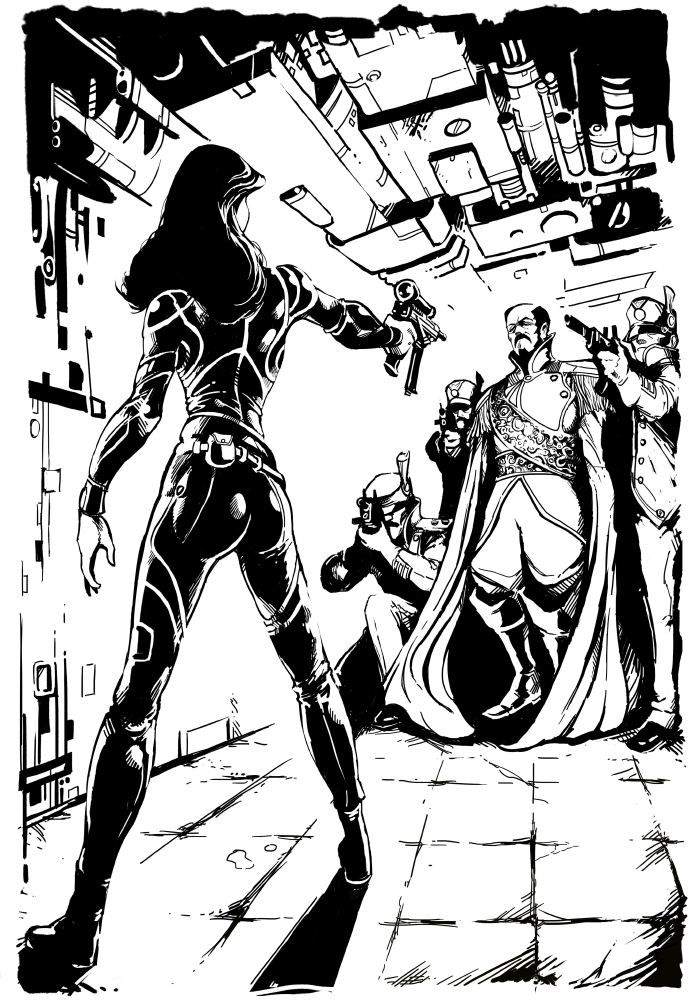 Clearly some talented artists out there…

I’m also fascinated to see some of the artwork that’s coming out of the Elite:Anthology, tales from the Frontier. Looks like that’s going to be interesting!

If I have a concern at this point it’s around the number of actually pledgers we have. These remain relatively low, despite Lave Radio and Frontier giving us a plug, forum posts and lots of social media and so on. Those onboard already have pledged very generously, but there’s no substitute for numbers. I’d hope for more this stage given the number of pledgers for the books from the original Kickstarters.

My own Kickstarter had 435 backers for instance and Kate’s 811… our current one only has 130 despite representing 4 books. Did many folk back to ensure E:D got across the line… have they disengaged throughout the year… is it the time of year… kickstarter fatigue… cross-pollenation across the original kickstarters… something about the project itself… Thargoids? Is there something else at play here?

Any feedback on the Kickstarter is very welcome – there’s still plenty of time at this stage to tweak things around. I’d love to hear from those who pledged the first time round as to what they think now – and if you can spread the word, we’d very much appreciate it!

We still write on, Commanders!